After some technical difficulties, I think I'm back.  Thanksgiving, as always was fabulous.  The company was great and the food....superior.  This was not so much "Marilyn's Table" as, The Clay Table.  Here is what we had:

The spread was simple but very nice.  Sliced onions are caramelized with a bit of garlic until browned.  Cream cheese and yogurt are added.  The spread is chilled for easier spreading. The nuts are tossed with a mixture of beaten egg whites, sugar and spices.  They are then spread on a baking sheet and toasted until crispy.  The terrine was the biggest challenge.  I had never attempted one before, but a group in my class made one and I thought, why not?  Vegetables (zucchini, yellow squash, eggplant, tomatoes, and portobello mushrooms) are thinly sliced and brushed with a marinade.  They are spread on baking sheets and dried in a low oven.  They are alternately layered in a plastic wrap lined loaf pan. A layer of goat cheese and egg is spread over all.  Another layer of vegetables and goat cheese is added ending with egg plant.  The plastic wrap tightly covers the  pan.  A cover of foil is put over the pan and it is placed in a hot water bath and cooked.  When done, the pan is cooled slightly.  A couple of heavy cans of vegetables are placed on top and the pan is refrigerated for a couple of days.  At serving, the cans are removed and the foil.  The plastic loaf is removed, uncovered and sliced.  Very pretty layers and quite tasty.

For dinner, we had not one, not two, but three turkey breasts.  Two were brined with a mixture from World Market.  Excellent flavor and very juicy.  The third was a smoked breast and gave a very different flavor.  Excellent as well.  The pilaf was very pretty and the wheat berries added a crunch to the dish.  I need to get the recipe!  The sprouts are roasted and tossed with sauteed shallots and bacon.  The Panko and cheese are spread over the top and baked until crusty.  As always the molded salad special.  Fruit pieces in red gelatin. Something we all look forward to.

What can I say about cheesecake??  It was creamy and very pumpkiny. (not a word, but a very abt description)  The glaze and whipped cream set it off perfectly.

Though I have photos, this new browser does not seem to recognize them?  Will work on it for next time

I hope your Thanksgiving was a nice as ours.  Time to start making the Christmas menu.
Posted by Marilyn at 4:50 PM No comments:

This week Marilyn's Table has only one dish. I have begun putting together things to take for Thanksgiving, so next week should be a full meal. Pasta is my 'go to' meal. This one was outlined in a blog I follow, "Octoberfarm'. Bacon, eggs and cheese are the main ingredients in a Carbonara. Some unexpected extras make this a great meal.

Bring a large pot of salted water to a boil for the pasta.

Cook linguini in the salted water. Drain saving about a cup of the pasta water. Dump the hot cooked pasta into the bowl with the eggs, butter and herbs. Toss until well mixed. Add grated Parmesan and toss again. Stir in enough of the pasta water to make the sauce smooth and creamy. Add crumbled bacon. To serve, spoon the pasta into a shallow bowl; top with the spinach and mushroom mixture and arrange the shrimp on top. Sprinkle with a bit more Parmesan.

In a large bowl put egg yolks and cubed butter. Add some of your favorite fresh herbs; I used thyme. 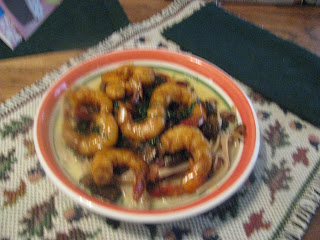 I thought I would share a photo of the pumpkin ravioli from last week. It to was excellent. 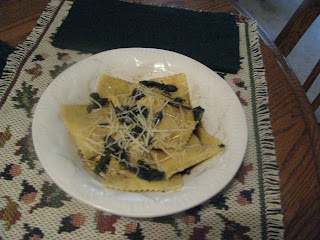 I look forward to sharing photos from our Wisconsin Thanksgiving. Have a great week and a blessed holiday with family and friends.

During my growing up years, my parents, aunts, uncles and cousins vacationed together. We stayed at a resort on Lake Kaubashine in northern Wisconsin for two weeks every summer. Later on when my boys were in high school, we returned with my parents. It was always a good time. One meal became a staple of our vacations. This week it was on Marilyn's Table with a couple of new twists.

Mom always brought our electric frying pan (remember those?) to prepare it. I used my slow cooker. The roast is seared in a bit of oil until all the sided are browned. Thick slices of onion are laid over the top and a couple of cans of tomatoes poured over everything. I had some kale and some Swiss chard which I chopped and added to the tomatoes along with salt and pepper. The lid is replaced and the dish is slow simmered until the meat is falling apart. Slices of mozzarella cheese are layered over the top and slightly melted. The meat is served with mashed or baked potatoes. The gravy is spooned over all. This is one of my favorite winter dishes and I will prepare it again when the snow flies. I expect to use the leftovers by shredding the meat and spooning some of the gravy over the top and serving it on a Ciabatta roll. Messy but good!

While doing my shopping this week, I came across frozen pumpkin ravioli. I don't usually buy prepared foods, but this was pumpkin ravioli. Pumpkin is a favorite of mine, I even put it in my oatmeal. To my surprise the ravioli pillows were excellent. A bit of sweetness and some spices gave it a lot of flavor. After they were cooked in boiling water I spooned browned butter and sage over the top. Excellent with a bit of grated Parmesan cheese over the top. I will purchase more of the ravioli and keep them in the freezer for later on.

I appears that fall is slowly changing to winter. The colored leaves are pretty much gone and we even had some snow flurries on Thursday. More comfort food will be on the table in the next weeks and, of course, Thanksgiving is only a few days away. Stay warm!
Posted by Marilyn at 11:42 AM 1 comment:

One of the reasons I love fall so much is the availability of fall vegetables. Pumpkin is one of my favorites and this week I have three dishes on the table using it. All three use pumpkin from a can, not pumpkin pie mix, but plain pumpkin puree.

Oatmeal with Pumpkin, Nuts and Cranberries

Breakfast for me as soon as the weather cools down is oatmeal. I use Kashi Go Lean instant. It is mixed with hot soy milk and pumpkin, cinnamon and chopped nuts are stirred together. The oatmeal is topped with blueberries and dried cranberries. This is a filling way to start the day. Very tasty too I might add paired with a cup of tea.

Soups and stews are great ways to warm the body and soul as the seasons change. I have many variations of chili, but this one was new and quite good. Good quality ground beef is browned with chopped onions and minced garlic. Chopped green peppers are added and cooked until slightly softened. Canned diced tomatoes are added along with pureed pumpkin, drained kidney beans, chili powder and cumin. Salt and pepper to taste and served with sour cream and grated sharp cheddar cheese. The leftovers will make for great lunches since the weather is to be cool and wet in the next week.

Cornbread is a natural to accompany chili. This one has the addition of pumpkin and spices. Whisk together all purpose flour, whole wheat flour, cornmeal, baking powder, salt, cinnamon and nutmeg. In a separate bowl beat two eggs. Whisk in pumpkin, brown sugar oil and molasses. Make a well in the dry ingredients and gradually add the wet ones. Pour mixture in a greased square baking pan and bake for about 30 minutes. Served warm with cinnamon butter, this is excellent with the chili.

This weeks' table was all about comfort foods. My annual bottle of egg nog is in the refrigerator to add to morning coffee and hot tea. It does seem that our summer is gone and winter is in our future. Next weeks' menu is still in the works. Stop by and see what's on Marilyn's Table next week. Stay warm!
Posted by Marilyn at 6:10 AM 3 comments:

Marilyn
As you can see, cooking is a passion of mine. I am a believer in "Cooking is like love. It should be entered into with abandon or not at all" -Harriet Van Horne I also enjoy reading, mostly mysteries. I have worked in academic libraries for almost 40 years and will be retiring the end of June 2013. Will be interesting to see what the next stage of my life holds in store. I enjoy travel, especially cruising and spending time with my family and friends.

Oliver and Maxine enjoying a nap